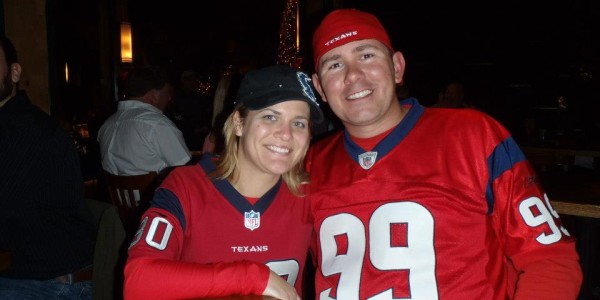 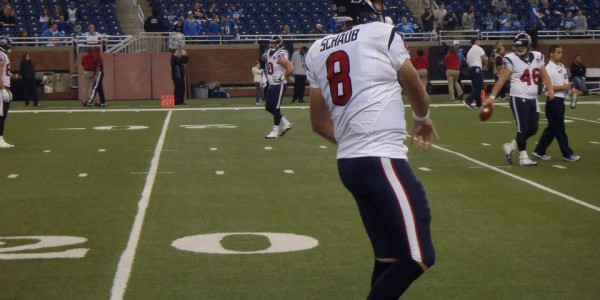 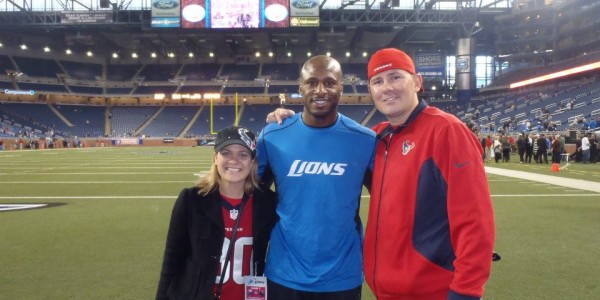 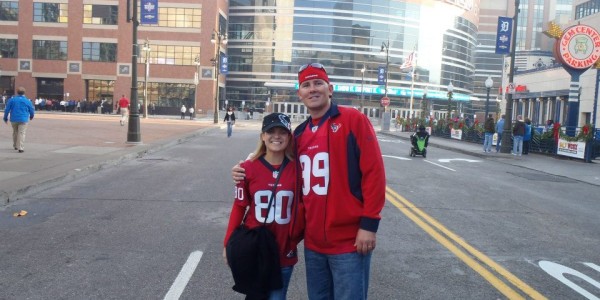 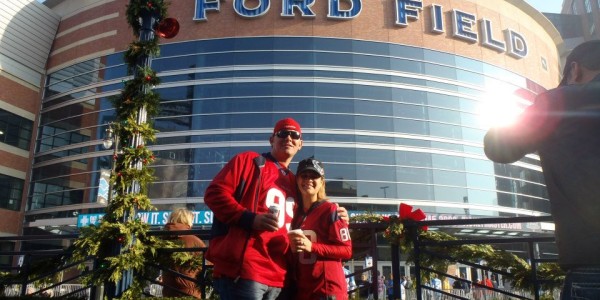 As a Texans fan and knowing they were playing the Lions on Thanksgiving and the fact that all proceeds benefit military families, I couldn’t resist buying a ticket.  But never in a millions years did I think I would win.

Friday Night, just 6 days before the game I received a call and e-mail saying I had the winning ticket and was selected for the Drayton Florence Foundation Ultimate GameDay Giveaway.  I could not believe it!  Growing up I’ve always watched the Lions on Thanksgiving Day and it has been on my bucket list to attend if the Texans every played them on that day.  Somehow, someway it was coming to fruition.  My wife who is a RN at a hospital here in Houston was fortunate enough to get off work on short notice.  I think it helped with her boss being a big Texans fan, and my boss being one as well.  😉

Thanks to Frontier Airlines and the airline voucher we flew from Houston to Detroit on Wednesday the 21st.  We stayed at one of the nicest hotels I have ever been to – the Westin Book Cadillac in downtown Detroit.  Thanks to the generous support of Drayton’s Foundation and the hotel, the 2-night stay was fully complimentary.

Thanksgiving Day came and my wife and I headed off early to the stadium to enjoy some tailgating.   We enjoyed some cold beverages just outside the stadium at a local bar & grill and visited with many Texans and Lions fans.  Once the doors opened to the stadium we went inside and received our Pre-Game Sideline Passes.  It was an unbelievable experience walking through the tunnel and onto the field.  My wife and I were quickly greeted by Drayton, as we probably stuck out like a sore thumb wearing our Texans red.  It was awesome to meet a pro athlete, but even more of an honor to meet a guy who stands for supporting such a great cause – our Armed Forces.  Drayton and I had a good conversation and got to take a few pictures.  Knowing he was going to be covering Andre Johnson most of the game you could tell he was extremely focused at the task at hand.  It was cool he was able to take a few minutes before the game to say hello.  Definitely a class act guy.

We enjoyed the sideline passes for about an hour. We were able to walk up and down the sideline watching both teams warm-up.  Seeing these guys in full pads just feet away makes you realize how big and physical they are.  We then were escorted back to the tunnel towards the main concourse to our seats.  While in the main tunnel both teams came through and walked right by us.  It was awesome seeing each player’s ‘GameFace” as they headed to the locker room just minutes before the start of the game.

We had great seats right on the Lions sideline, lower level, looking right down the goal line.  Being visiting team fans wearing our Texans jerseys I wasn’t quite sure what to expect from the Lions fans.  I will say, the fans were great!  All were friendly and we enjoyed a little back and forth smack talk.

As far as the game goes, I will say that was the wildest, craziest, pull-your-hair-out games I have ever attended.  The Lions defense started strong holding the Texans offense to many 3 and outs early on.  Megatron made some big catches on 3rd down and it wasn’t looking too good for the Texans.  As both teams began to settle down it was looking more and more like the shoot-out I thought it would be.  Drayton made some real good plays on Andre Johnson to knock the ball out of his hands.  It was almost bitter-sweet watching Drayton go against Dre’.  After a bad call by the referee’s and a rule that makes no sense, the Texans were back in the game.  After a 98 yard drive the Texans tied the game late in the 4th.  Heading to overtime my stomach was in knots.  Our kicker lined up for the game winning 47 yard line and missed it just to the left upright.  I thought that was our chance and we let it slip away.  The Lions drive down and set up Hanson who is automatic for a game winning FG.  I couldn’t believe what I was seeing as it bounced off the upright on to the field of play.  The Texans were able to drive down with just a few minutes remaining in overtime to kick the game winning field goal.  That game was one heck of a roller coaster.

After the game we stood outside the stadium and saw the Texans players heading to the bus.  My wife and I made our way to Greek Town and enjoyed Thanksgiving dinner at Fishbones.  We had an excellent meal and was able to watch the Redskins hold off the Dallas Cowboys.

Knowing our flight was Friday evening, we went for an early lunch at HardRock in downtown Detroit where we were also given food vouchers from Drayton.  We enjoyed good food and a good atmosphere at the Hardrock.  After lunch it was time to head back to the airport, and back to Houston.

My wife and I had an amazing time and whether the Texans won or lost it was one I’ll never forget.  I want to thank Drayton Florence for all that he does on and off the field.  I know the city of Detroit is better off with the support he gives to the men and woman of the military.  Best of luck the rest of the season!  #SaluteToService